After Recode’s Zuckerberg interview was published Wednesday, in which Zuckerberg stubbornly defended Holocaust deniers and conspiracy theories calling mass shooting victims and survivors “crisis actors”, the internet instantly exploded with backlash against Facebook.  Zuckerberg, then was forced to try to backtrack on his statements in hopes to “clarify” what he meant in his given answers and responses. Of course, while trying to fix his own mess, Zuckerberg just shoved his InforWars defending white foot further into his own mouth. Zuckerberg claimed in a statement that while Facebook does not have any specific written policy that prohibits users from posting false information, but that if such content crosses the line to bully or harass individual victims of mass shootings or families of victims then that would be against their community standards and would be removed.

Twitter user then took Zuckerberg at his word and reported the most notorious Facebook Page pushing the violent lie that the Sandy Hook massacre never happened called, “Sandy Hook Hoax” for harassment. This FB Page has thousands of followers and many of it’s followers have since been arrested and convicted on various criminal charges of stalking, harassment, and sending death threats. The Page had a long documented history of inciting violence and criminal harassment, so therefore would be a Page that was actively violating Facebook’s harassment and bullying policies and should be removed completely by Facebook.

Well, on Thursday morning on 7/19/18, approximately 2 days after reporting the page to Facebook for harassment, Facebook issued this report: 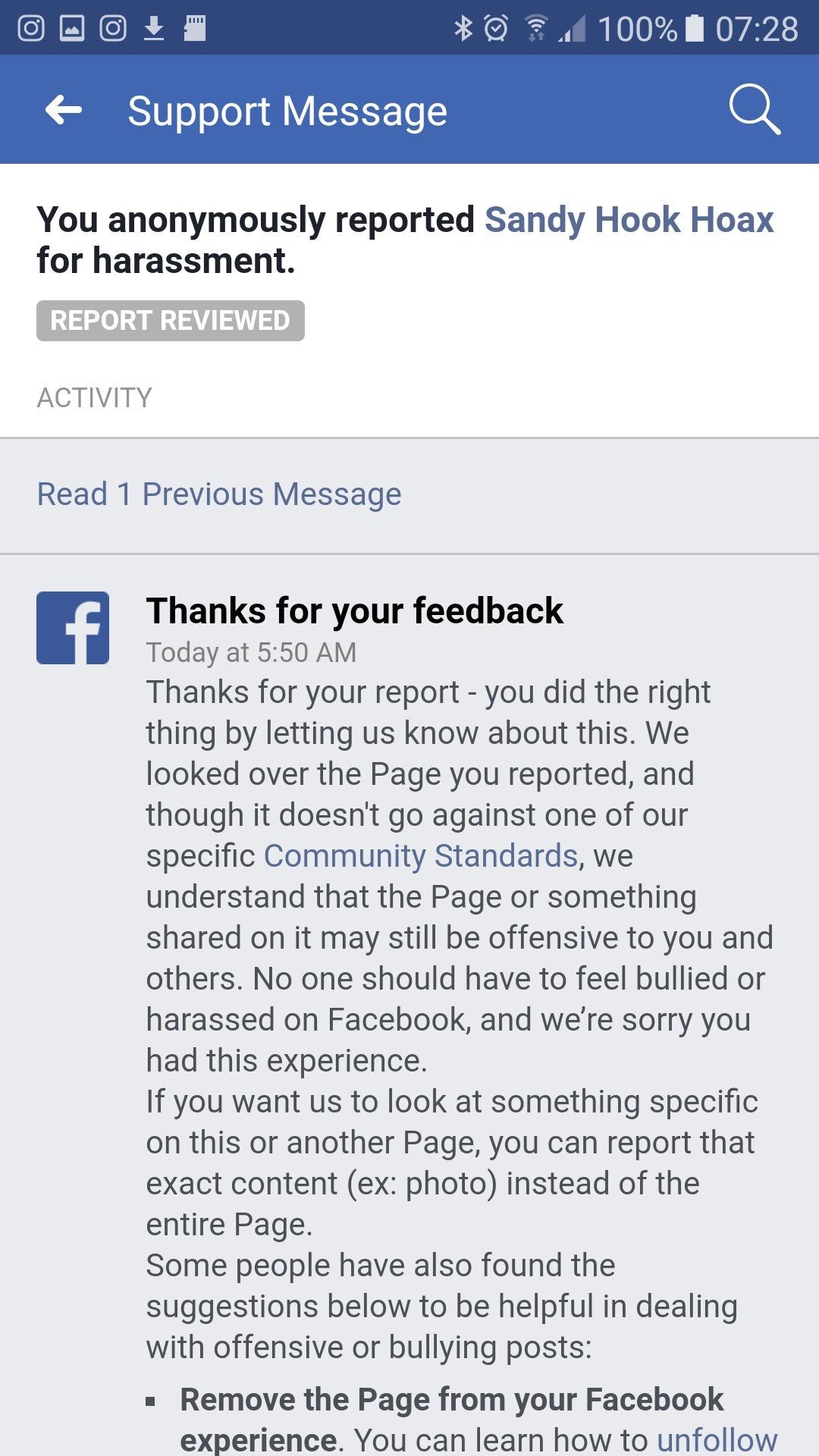 A Facebook content reviewer once again, approved the dangerous page and allowed it to remain on it’s platform. It wasn’t until later in the evening that same day Facebook approved the Sandy Hook Hoax page, that social media along with practically every major media requesting comment, finally shamed Facebook enough to finally pull down the page.

Had Zuckerberg never made such an ass out of himself so publicly with his Recode interview, Facebook most certainly would have never taken down that page. There are still dozens, if not hundreds more, pages and groups on Facebook which push the violent myth about Sandy Hook that Facebook has yet to remove as of yet and I’m sure the admin of the one page removed is already working on new page right now. It’s just out right disgusting that it took this long for Facebook to finally remove such a dangerous page that is responsible for criminal convictions of many of its followers.