Women Can’t Even Express Their Opinions Safely On Facebook

Women Can’t Even Express Their Opinions Safely On Facebook

A woman of color took to her Facebook page to post about her feelings towards news event that involved a murdered black man with a very known history of domestic violence against women, but of course the media covering the story painted it in a very different light. This woman, decided to post her feelings and opinions on the current issue by talking about her own lived experienced. So of course after posting a very personal post which detailed her own past experiences of abuse, Facebook called her post “hate speech” and removed it, because that’s where FB’s priorities lay. 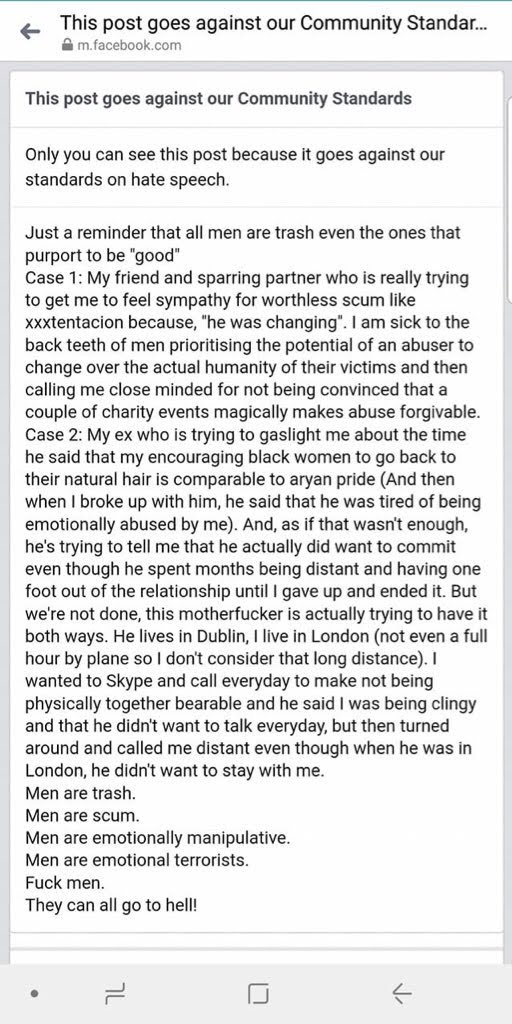 Facebook continues to make their platform actively harmful and dangerous for women by silencing women who are strong enough to speak out about their lived experiences of abuse, sexual assault and harassment. Facebook continues to deem posts like these as “hate speech” while men are allowed to stalk women, threaten women, and some have now gone on to kill women all thanks to groups they associate with and on via on Facebook’s platform, all free of any consequences.